skip to main | skip to sidebar


A friend of mine died recently. Suddenly. Accidentally. Harry and Wini were on their annual extended vacation away from Illinois, and just a few days before his death, Harry had sent an email to a number of his friends—smiling on the Atlantic beach, trying not to rub it in.

Harry Hoffner was a bass in the choir at College Church in Wheaton. He was there before I came, and he was there after I left. He loved College Church, sang with joy, and along with Wini faithfully taught the Choir Bible Study Sunday School class. We became friends, and found a little time (never enough) to have coffee and talk about many things. These are the bare facts of our relationship.

Harry was a renowned Hittitologist. He retired in 2000 from teaching at the University of Chicago, where he oversaw the Chicago Hittite Dictionary which will forever be associated with his name (along with others). Sounds dull, do you think? Harry was anything but dull. He was an avid Chicago Cubs fan, but a remarkably joyous man in spite of it. He loved sports, and was passionate about his teams. He loved music, and had sung not only in church choirs, but in the Chicago Symphony Chorus under its founding director, Margaret Hillis. Harry Hoffner, on Grammy award winning recordings.

Harry was a skilled Bible teacher. You might think that a Hittitologist would make a dry Bible teacher. You’d be wrong. He taught Bible Study Fellowship for many years, and in our Choir Bible Study we found him not only detailed (well, of course we was that) but deeply personal. I envied his ability to draw personal application out of arguably obscure Old Testament passages. Harry loved Jesus . . . so he loved God’s Word, and this came through in his teaching.

In 2005 the College Church Choir worked with Chinese musician Timothy Su, to learn and sing a song or two in Mandarin. During that time Harry sent me an email with a photo of himself sitting in a tent in Turkey. In 2003 Harry was flown to Turkey as an advisor on a film about the Hittites; in the photo he is reading aloud some script he had written for the actors, for verisimilitude in the project, apparently. In reply to his email, I wrote:
Now that we have wrapped our mouths around Mandarin, maybe it's time to learn a Hittite praise song? I don't mean a Canaanite idol song, but a culturally apt worship song sung by Hittites who became Old Testament believers. Like, what would Uriah have sung?
That was February 10, 2005, a Thursday. That night Harry showed up for choir with “Uriah’s Song.” Later he reformatted his work into the more professional look you see below.

Here is the lovely poetry Harry dashed off that day. I assume it is as lovely in Hittite as in English. You can see his true poetic nature, as he provides a literal translation of the Hittite that is every bit as engaging as the official song:

Uriah’s Song
Far from my home I
Came to His temple.
There in that house was the True God.
Hittite lips sang His praises.
[literally: From a distant land I came to His temple. His house became my joy. I sing (to Him) in Hittite.]
Not to Him foreign,
Enemy neither –
Enemies He makes His servants.
He swept away my resistance.
[literally: Not to Him foreign, nor enemy – He makes enemies into servants. He conquers my heart completely.]
Scorned by a wife and
Killed by a king – yet
God is my Spouse and my Sov’reign.
E’er will He love and rule me.
[literally: Betrayed by a woman, murdered by a king – God is my marriage partner (and) ruler. He will not forsake me.]
© Harry Hoffner, 2/10/2005

Thank you, Harry, for all the ways you enriched my life, and my walk with Jesus. I hope you’ve had a chance to meet Uriah already, and to sing with him! 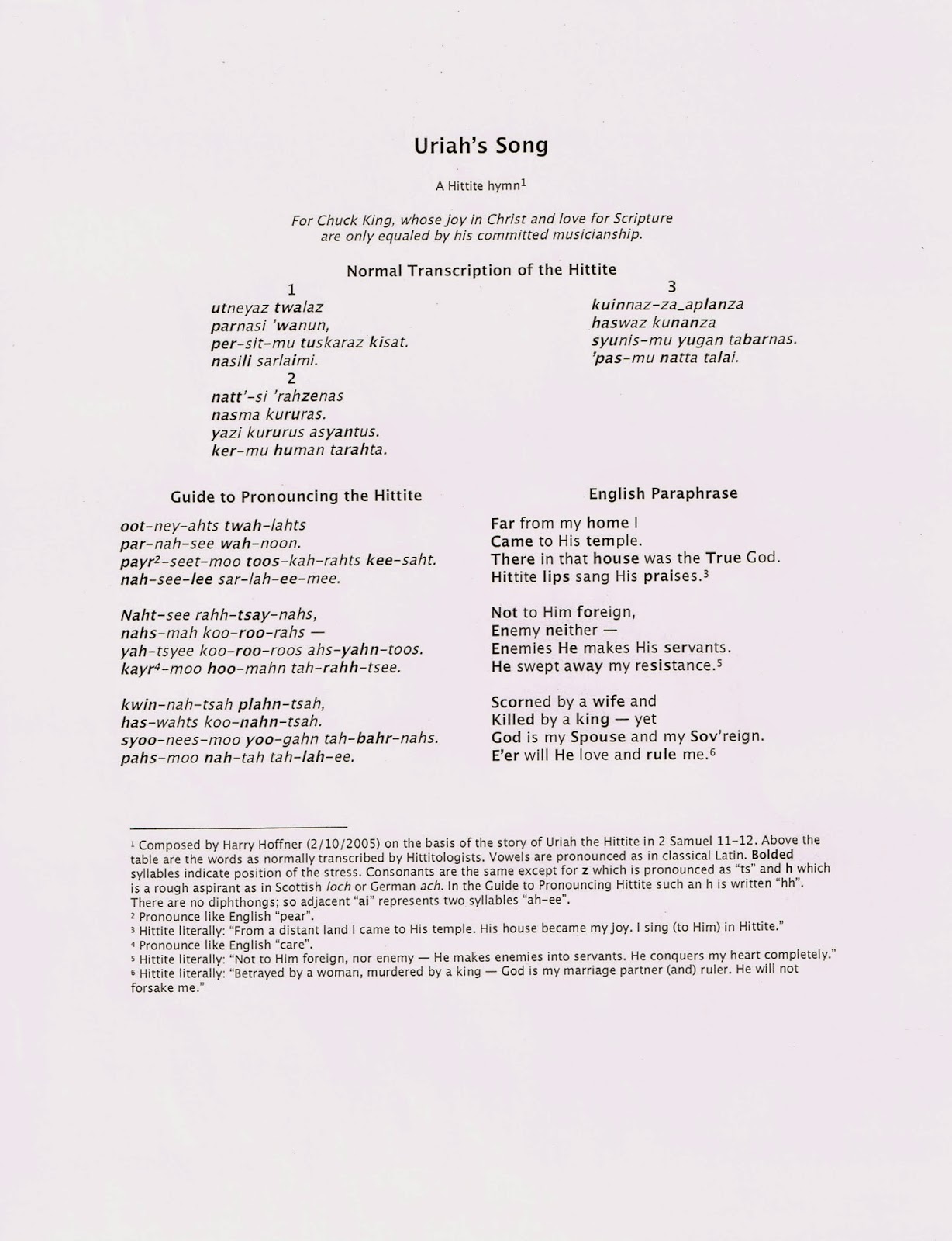 Posted by Chuck King at 3:19 PM No comments:

Church music - its materials, practices, joys and sorrows, and people.

The name of this blog is explained in the first post.