skip to main | skip to sidebar

I get the news I need on the weather report

As I write, on March 20, there is a fine light snow in the air. The Spring Equinox will arrive at 11:57am where I live. “Spring has sprung,” in spite of appearances at the moment.

It’s been an unusual winter here in Chicago, with one of the highest annual accumulations of snow. What my Karen and I call a “Minnesota winter” – snow came, stayed, and accumulated; we didn’t have the typical Chicago snow/thaw/melt/repeat cycle. In our view, this is actually a good thing.

But there has been a lot of complaining in the circles I read and listen in on. Too much snow, too cold, for too long. Me? This winter I’ve had a theological “aha!” about the way we think and talk about the weather.

As moderns, we know how weather happens. Our models for forecasting are getting better all the time. We are rarely surprised by unusual weather events, and we find that it is increasingly easy to make reliable long-range (5- to 7-day) plans around the forecasts.

Therefore, we reason (like the good products of the Enlightenment that we are) that God has nothing to do with today’s weather. Sure, we concede, he cares about us and the affect of the weather on us. God still wants us to be thankful and joyful in all circumstances. But is God actually responsible for this fine light snow in the morning just hours before the Equinox?

If not, then we may complain about the weather.

BUT: What if, without ignoring the science, we still believe that God is responsible for the weather? What if it was God’s plan for northern Illinois that we should have so much snow, so often and for so long, and some pretty intense cold to boot? Then are we comfortable complaining about it?

Well, I don’t mean to sound better than I am. I just found that, this winter, I could not complain. And then I found that I could be not only thankful, but joyful. Of course I am happy that spring is coming. Yes, I’ve been eager for it. And check back in the heat of July and August and see if I am still maintaining my cheery attitude toward God and his ways with our climate.

You see—modern Christians with a foot in scientific materialism—if God is not directly involved (read: responsible) for our weather, then how is he not the Great Watchmaker, the Maker who set things in motion and leaves them to their own processes? Is he not rather actually holding all things together by the word of his power (see Colossians 1:16—17)? This winter I have regained some of the wonder by believing this means even today’s weather.

So, today I’m thankful that it is snowing on the first day of Spring, even if I’m also thankful that there’s not going to be enough that I have to shovel again.

* Paul Simon, "The Only Living Boy in New York"
Posted by Chuck King at 6:14 AM No comments:

So here I am, post-thesis, with three part-time jobs and something more permanent "out there." Winter's grip is loosening here in Chicago land, but not so much that I can be out on my bicycle. There are always musical goals to pursue, to be sure. And - of course - books to be read!

The advance news on John Eliot Gardiner's biography of J. S. Bach surfaced as I was writing my thesis this summer. I have to say, I was relieved to hear it would be released too late for me to have to account for it in my work! No doubt it would be excellent and helpful, but I did not relish what it might do to my progress. It hit the shelves at about the same time I submitted the thesis.

My Karen gave me a copy for Christmas - a prized gift! But I could not bring myself to begin it until my thesis had run its full course. As soon as it went to the technical reader (official copy editing; jots-and-tittle stuff) I cracked Bach: Music in the Castle of Heaven. And, oh what a rich, engaging work this is! I am going to enjoy savoring this, a few pages at a time, every day for weeks. Last night Gardiner addressed the Pietists for the first time. I was relieved to see that what he wrote concurs with the portrayal in my thesis . . . though, of course, more elegantly and succinctly stated.

On less scholarly fronts, I have been working through The New Oxford Book of English Verse, with the goal of reading cover to cover through this year. I am writing occasionally about that in my other blog. And, to provide a break from my course prep work, weekends I have been re-reading the C. S. Lewis Narnia series. I'm eager to get to The Last Battle this weekend, after which I will begin his Space Trilogy. Those books will take longer than a weekend each, especially once the roads open up for bicycling! Then, it will be on to The Hobbit and the Lord of the Rings. This is my year for recapturing wonder.

My professional project this week has been focused on the nature of Christian Higher Education, specifically paying attention to the role of campus worship ("chapel"). Yes, I have a particular reason for this right now, but more generally I have ideas that I want to work out. So, I've read Duane Litfin's Conceiving the Christian College, Arthur Holmes' The Idea of a Christian College, and David Dockery, Renewing Minds. (Litfin is the previous president of Wheaton College, where I am completing my theology degree; Dockery is the newly appointed president of Trinity International University, where I am teaching music history this year.) Also very helpful is the essay by Philip Ryken, "The Liberal Arts in the New Jerusalem," in Liberal Arts for the Christian Life. I have pretty strong opinions about worship [oh, really?!?] and want to think clearly about what the options and opportunities are for worship in the academy. I'm eager to get my hands on James K. A. Smith, Desiring the Kingdom: Worship, Worldview, and Cultural Formation.

All this, with lectures and rehearsal prep to boot. What a life!
Posted by Chuck King at 7:23 AM No comments:

The Art of Dying.

A cheery thought for a sunny March day at the beginning of Lent.

I was introduced to the ars moriendi during my thesis reading. David Yearsley, in Bach and the Meanings of Counterpoint, suggests that Bach’s final composition, the chorale prelude “Vor deinen Thron” (Before thy throne) was “a prelude to the unimaginable joys of the transfigured body. It is a chorale prelude not to congregational singing, but to eternal life.” (p. 36; you can read this chapter here)

The Art of Dying was a well-established discipline to consider how to make a good death. That is, how to die without anxiety, in such a way as to experience spiritual comfort personally and to give loved ones comforting assurance of one’s spiritual preparedness. By the 17th century, the general tone of this discipline was that “dying well” was the natural end of “living well.” Even the Puritans saw ars moriendi as an important discipline and pastoral care matter: Thomas Becon’s The Sick Man’s Salve predates by a century Jeremy Taylor’s better-known Rule and Exercises of Holy Dying.

Draw your own conclusions about why in the world I am thinking about ars moriendi these days. There are more than a couple, but I’m not about to embark on a public psychoanalysis! Let’s just say that I don’t seem to be able to avoid it. Two weeks ago, at the Bach Cantata Vespers in River Forest, one of the hymns was “Who Knows When Death May Overtake Me” – with each line concluding “My God, for Jesus’ sake I pray Thy peace may bless my dying day” – a prayer for the living who know they will one day die. 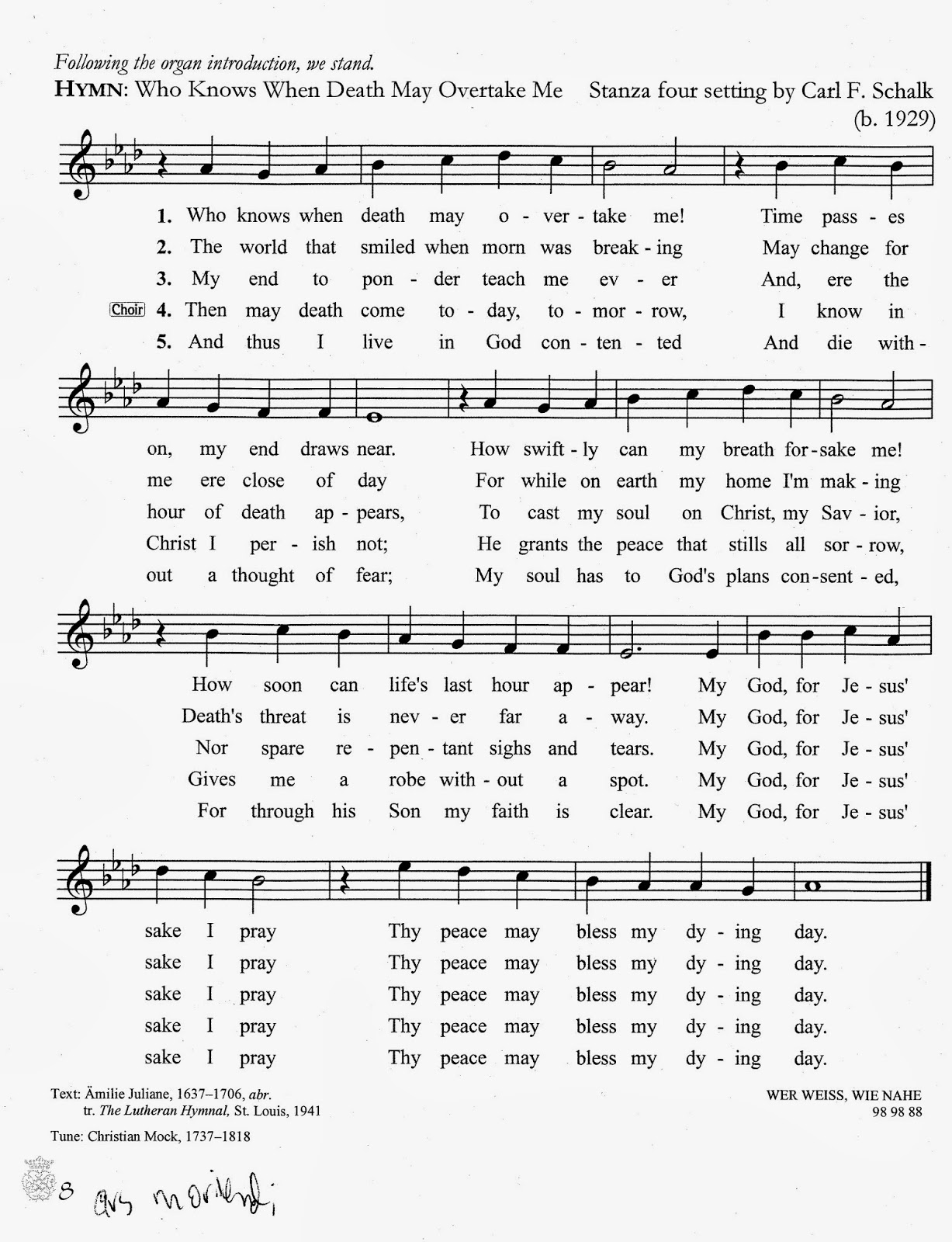 In my reading through The New Oxford Book of English Verse (which I occasionally write about here) I have encountered this theme often enough that I have decided to track it through the year. I rather suspect that as the chronology of English poems marches into and beyond the 18th century, this theme will – er, ahem – die out.

Eighteen-year-olds don’t get this, and thirty-year-olds don’t want to. We protect children from the very notion of death and especially of their own death. (Though our forebears had no such scruples: see the children’s hymns of Isaac Watts and Cecil Frances Alexander, which now to many seem downright sadistic, or at best macabre.) But our forebears may have been on to something: if we live with our end in view, we may just perhaps live better.

And that is at least one part of what Lent is about. I won’t be writing a Lenten series, but there’s a Lenten thought for me. And to that end, here is an appropriately themed poem which seems apt for this season. It was part of my Oxford poetry reading this morning:

Death, be not proud, though some have called thee
Mighty and dreadful, for thou art not so;
For those whom thou think'st thou dost overthrow
Die not, poor Death, nor yet canst thou kill me.
From rest and sleep, which but thy pictures be,
Much pleasure; then from thee much more must flow,
And soonest our best men with thee do go,
Rest of their bones, and soul's delivery.
Thou art slave to fate, chance, kings, and desperate men,
And dost with poison, war, and sickness dwell,
And poppy or charms can make us sleep as well
And better than thy stroke; why swell'st thou then?
One short sleep past, we wake eternally
And death shall be no more; Death, thou shalt die.
John Donne, 1572—1631, Holy Sonnet 10
Posted by Chuck King at 9:24 AM No comments:

Church music - its materials, practices, joys and sorrows, and people.

The name of this blog is explained in the first post.